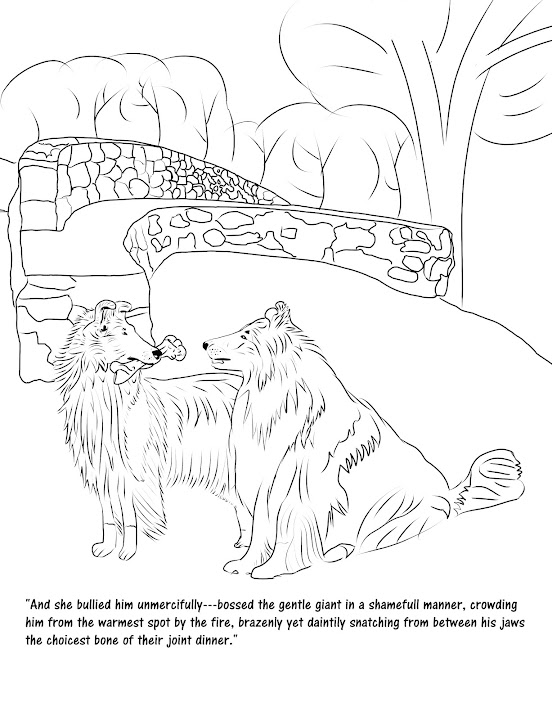 And she bullied him unmercifully—bossed the gentle giant in a shameful manner, crowding him from the warmest spot by the fire, brazenly yet daintily snatching from between his jaws the choicest bone of their joint dinner, hectoring her dignified victim into lawn-romps in hot weather when he would far rather have drowsed under the lakeside trees.

Her vagaries, her teasing, her occasional little flurries of temper, were borne by Lad not meekly, but joyously. All she did was, in his eyes, perfect. And Lady graciously allowed herself to be idolized, for she was marvelously human in some ways. Lad, a thoroughbred descended from a hundred generations of thoroughbreds, was less human and more disinterested.

Life at The Place was wondrous pleasant for both the dogs. There were thick woods to roam in, side by side; there were squirrels to chase and rabbits to trail. (Yes, and if the squirrels had played fair and had not resorted to unsportsmanly tactics by climbing trees when close pressed, there would doubtless have been squirrels to catch as well as to chase. As for the rabbits, they were easier to overtake. And Lady got the lion's share of all such morsels.)

There was the ice-cool lake to plunge into for a swim or a wallow, after a run in the dust and July heat. There was a deliciously comfortable old rug in front of the living-room's open fire whereon to lie, shoulder to shoulder, on the nights when the wind screamed through bare trees and the snow scratched hungrily at the panes.

Best of all, to them both, there were the Master and the Mistress; especially the Mistress.

Any man with money to make the purchase may become a dog's owner. But no man—spend he ever so much coin and food and tact in the effort[Pg 4]—may become a dog's Master without the consent of the dog. Do you get the difference? And he whom a dog once unreservedly accepts as Master is forever that dog's God.

To both Lad and Lady, from the first, the man who bought them was not the mere owner but the absolute Master. To them he was the unquestioned lord of life and death, the hearer and answerer, the Eternal Law; his the voice that must be obeyed, whatever the command.

From earliest puppyhood, both Lad and Lady had been brought up within the Law. As far back as they could remember, they had known and obeyed The Place's simple code.

For example: All animals of the woods might lawfully be chased; but the Mistress' prize chickens and the other little folk of The Place must be ignored no matter how hungry or how playful a collie might chance to be. A human, walking openly or riding down the drive into The Place by daylight, must not be barked at except by way of friendly announcement. But anyone entering the grounds from other ingress than the drive, or anyone walking furtively or with a tramp slouch, must be attacked at sight.

Also, the interior of the house was sacrosanct. It was a place for perfect behavior. No rug must be scratched, nothing gnawed or played with. In fact, Lady's one whipping had followed a puppy-frolic effort of hers to "worry" the huge stuffed[Pg 5] bald eagle that stood on a papier-maché stump in the Master's study, just off the big living-room where the fireplace was.