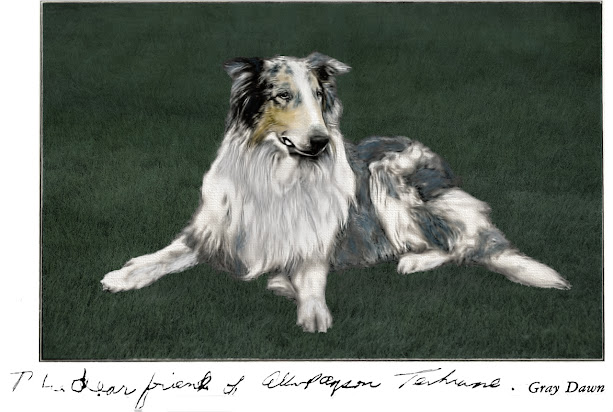 The dear friend of Albert Payson Terhune.   Gray Dawn.
I did this colorization a few years ago, all by hand.  I use artificial intelligence now which greatly assists in the basic formation of colors, but it still requires quite a bit of hand work to "get it right".
Sometimes (usually) the AI wants to make all collie dogs sable.  Collie dogs come in 4 main colors with variants of each.  An in depth discussion of collie colors would require a genetic explanation, which I will leave to breeders and veterinarians.   The basic colors are Sable, Tricolor, Blue Merle, and White.
The story of Gray Dawn, as written by Albert Payson Terhune, is one of my favorites.  He was born on a gray dawn and was quite a character.  Terhune gave thought to giving up on Dawn, but later declared that his earlier thoughts were badly misplaced as Dawn became one of his favorites, and remains so with many Terhune fans to this day.