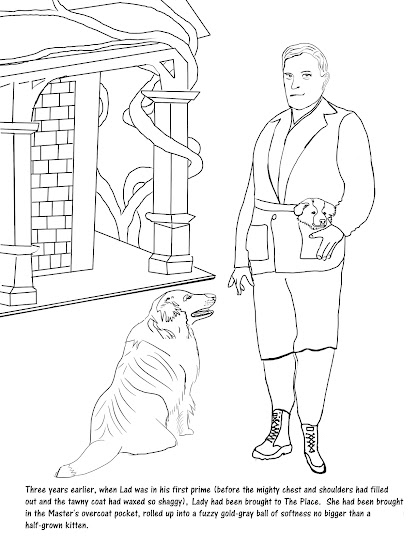 Three years earlier, when Lad was in his first prime (before the mighty chest and shoulders had filled out and the tawny coat had waxed so shaggy), Lady had been brought to The Place. She had been brought in the Master's overcoat pocket, rolled up into a fuzzy gold-gray ball of softness no bigger than a half-grown kitten.

The Master had fished the month-old puppy out of the cavern of his pocket and set her down, asprawl and shivering and squealing, on the veranda floor. Lad had walked cautiously across the veranda, sniffed inquiry at the blinking pigmy who gallantly essayed to growl defiance up at the huge welcomer—and from that first moment he had taken her under his protection.

First it had been the natural impulse of the thoroughbred—brute or human—to guard the helpless. Then, as the shapeless yellow baby grew into a slenderly graceful collie, his guardianship changed to stark adoration. He was Lady's life slave.